Summer is the perfect time take a beautiful walk slightly to the north of Norwich city centre and experience the River Wensum. Here, we take a trip from Carrow Road to Cow Tower. If you set out just after lunch, you will probably arrive back in Tombland in perfect time for drinks and dinner.

If you are coming from the city centre, it is possible to avoid Prince of Wales Road altogether by entering the Cathedral Close via Tombland. Drop down the gentle slope, the cathedral herb garden on your left, past some exquisite flint houses around the green with their classic English country gardens and, just beyond the playing fields of Norwich School, you will come to Pull’s Ferry. Turn right here and proceed along the river path. You will come out at The Compleat Angler pub. Crossing the very busy road at the lights, take the pavement and lower pathway abutting the water. In about ten minutes you will see the Carrow Road football ground ahead of you. Here we turn back and the ‘proper’ walk along the River Wensum begins.

Norwich Football Club came into being in 1902 and an early chant that used to ring out goes like this:

The stadium was originally built in 1935 in just 82 days – so fast that some locals called it ‘the eighth wonder of the world’. Jarrolds, the business we highlighted in our walk in issue number 29, sponsored it immediately and continues to do so today.

Another famous firm, situated literally adjacent to the stadium since the 1850s, was Colman’s. A legendary slogan of the firm in the late 20th century seemed to address both football and mustard – ‘Come on Colman’s. Light my fire!’

Walking back towards the city – you will gain a brilliant view of the Norwich Cathedral to guide you – you will see, on the river, the remains of a boom tower. These towers – Cow Tower is another at the end of this walk – were designed to control the movement of boats in and out of the city. Chains would be slung across the water and the Wherrys that used to trade in chimney pots, stone and other goods, would be allowed to progress after the payment of a fee.

Take the upper path, parallel to the river pathway. Soon you will come to the newish ‘Riverside Quarter’. This is a complex of luxury flats and a retail park that was built just as the building boom reached its peak. There is a swimming pool which is very convenient and well used.

Just past the Novi Sad friendship bridge (Norwich is twinned with the town of that name in Serbia), turn left towards the river and you will see two starkly beautiful modern sculptures which celebrate one of the Fine City’s most important firms which operated on this site – Boulton and Paul. The firm actually began as an ironmongery shop in what is now Little London Street in 1797. In 1864 it moved to Rose Lane. In 1867, it perfected a machine for the manufacture of wire netting and found that it could not keep up with demand from the colonies. However, the firm’s finest hour came in the First World War when Boulton and Paul became the hub of Sopwith Camel aircraft production. They were tested on Mousehold Heath.

Carry on along the road – Wherry Road – and you will come to the new ‘entertainment centre’ of the city, with pubs, clubs, a multi-plex cinema and bowling alley. You will also see, crossing the river, the clean lines of new Lady Julian Bridge.

The walk continues across the very busy main road opposite the station. Taking the left hand pavement and, if you wish, dropping down to the river pathway, you will soon come to Pull’s Ferry on the left hand bank of the river. This is a beautiful little flint house, now home to the Norwich Girl Guides, but once the gateway between the river and a stream – now gone – leading to the Anglican Cathedral.

A few hundred yards farther along the river bank, on the left hand side, is a path leading down to the water. A gruesome find awaits for, alongside the path on the right is a large tablet set in the grass and easily missed. It commemorates the unfortunate souls who died in agony in Lollard’s Pit, the site of which is a little farther along, almost opposite Bishop’s Bridge. A plaque on the Bridge House Pub commemorates the site. Many Christian martyrs, carrying their own bundles of firewood and preceded by chanting priests, were burnt at the stake here, in front of baying crowds.

The man who coined ‘The Fine City’

One man who loved to walk around this area and up to Mousehold Heath was a favourite literary son of Norwich, George Borrow(1803-1881), who wrote ‘The Bible in Spain’, the novel ‘Lavengro’ and much poetry besides. Two sayings of George Borrow are particularly well-remembered. The first refers to his beloved Mousehold Heath where he would walk for hours: ‘there’s a wind on the heath, brother; if I could only feel that, I would gladly live for ever’. The other, his description of Norwich as a whole, has become the city’s slogan: ‘Norwich, a Fine City’. It was replaced for a time by the much less catchy and rather arrogant ‘Norwich: England’s Other City’ which has now been unceremoniously ditched. A grand view of the Norwich skyline can be seen from the top of Mousehold Heath, highlighted on our Norwich photos gallery.

A few yards down river to the north of the Lollard’s tablet, providing a pedestrian crossing point, is the beautiful Bishop’s Bridge, so called because it led directly to the Bishop’s Palace. This is one of the oldest bridges in the United Kingdom. We know it existed in 1249 as there are records of its repair by the See at that date.

Bishop’s Bridge is etched in the Norwich mind alongside Kett’s rebellion, the most bloody episode in the city’s history. In 1549, the common man, robbed of his communal land by the nobility, found a champion in Robert Kett of Wymondham. 20,000 men assembled on Mousehold Heath. The King, insecure on his throne, was not best pleased and sent an army to crush the rebels.

In the ensuing battle, the Earl Warwick took control of Bishop’s Bridge, among other entrances to the city. Kett and his men tried in vain to cross the bridge into the city to reinforce his supporters. Wave after wave of brave men were repulsed and killed. So, when you stand on this lovely bridge, you are literally on the spot where carnage took place and hundreds of Norfolk men were cut to pieces.

Eventually, Kett retreated with the remnants of his army and made a last stand at Mousehold Heath. The remnant of his motley band was annihilated. Kett was hanged over the side of Norwich Castle as an example to the people. Nine of his senior lieutenants were also hanged from an oak tree called the ‘Oak of Reformation’. 45 more were hanged, drawn and quartered in Norwich Market Place. Another 250 were executed by various diverse means.

Continue straight along the road to the roundabout. Turn right and walk past Kett’s Tavern. Swing around to the back of the pub and you will see a footpath leading up to Mousehold Heath. There is a fine view of both Cathedrals, the Castle and Town Hall from the top.

Doubling back down the road to Bishop’s Bridge, turn right at the Red Lion and through an alleyway which leads to the riverbank. Straight ahead is the 12th century Cow Tower. It was originally a toll house where monks would take a fee from merchants who wanted to proceed upstream. Later it became what must have been a very grim prison before ownership finally transferred to the City at the end of the 14th century.

From here, carry on along the footpath, past the Adam and Eve pub on the left and St James’ Mill on your right and you will eventually arrive at Fye Bridge – this is where women would be punished for rowdy or drunken behaviour by ‘ducking stool’. 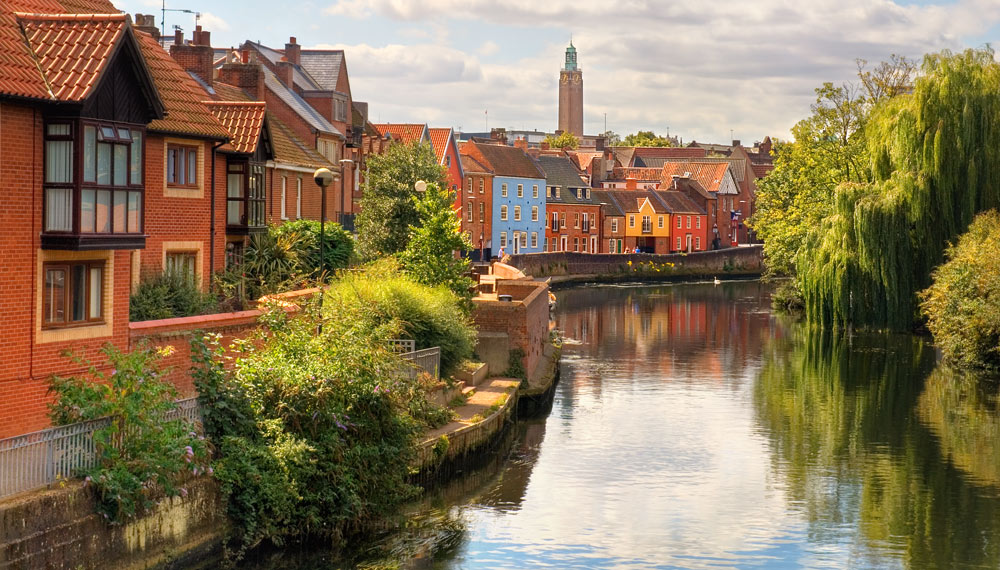 Turn left and proceed to Tombland – nothing to do with ‘tombs’ but derived from ‘thum’, meaning ‘empty space’. If you have been clever and timed your walk aright, this is a wonderful place in which to arrive in the early summer’s evening for a drink or a meal in some of the superb eateries, such as the Edith Cavell pub and restaurant.

Further details of Norwich life and history are available in the book ‘Norfolk – Exploring the Land of Wide Skies’ by Daniel Tink and Stephen Browning. It is available from Halsgrove at £16.99 and is on sale in all good bookshops and Amazon.