There is nowhere you can go in the ancient medieval city of Norwich that is not interesting. The centre of gravity has shifted from time to time but every part, almost every street, has had its moment in the sun, historically speaking.

This tourist Norwich Map highlights some of the most popular places to visit during your stay in Norwich. Use the map by clicking on the pin icons to reveal tourist attractions, car parks and accommodation options.

Norwich is the most complete medieval city in Britain.  It has, for much of its 1500 years been almost a separate kingdom – you don’t go through Norwich to get to another important city or area – and this relative isolation has resulted in a mixture of architecture, character and customs that is unique.

Almost every street has beautiful buildings wherever you look – up, down or straight ahead. There is an ‘odd’ balcony here, a beautiful gable there, and somewhere else an intricate footscraper or lovely doorway. If you are interested in old crafts, come see the original Town Hall with its squared flints or if you like to travel back in time, walk along Gentleman’s Walk below the market where Regency Beaus used to parade up and down in their best finery. 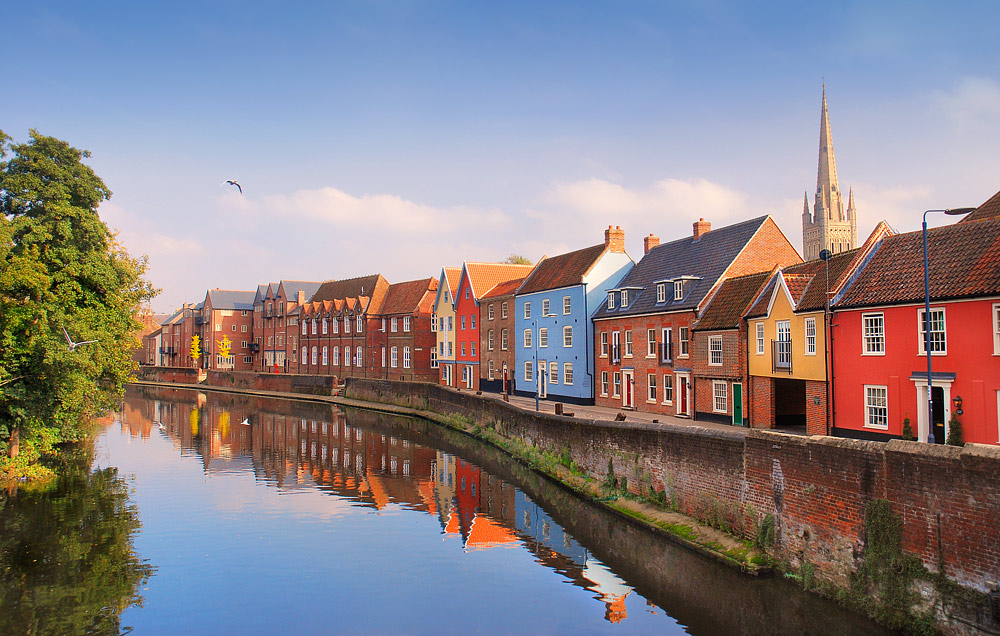 We are spoilt in Norwich, having so many buildings, mostly ancient but some modern ones, too, that are exceptional and so perhaps the architects (Charles Holloway James and Stephen Rowland Pierce ) were on a hiding to nothing when trying to please everyone.

Norwich has given birth or education to many eminent people – among them  Baroness Amos, Admiral Nelson, Edith Cavell, Stephen Fry, Delia Smith, Kazuo Ishiguro, Ian McEwan, George Borrow and John Chrome. Some famous industries have started here, too, including Coleman’s Mustard, Caley’s Chocolate, and Boulton and Paul who produced more Sopworth Camels in the First World War than anyone else.

There are two inspiring Cathedrals and churches so grand, like St Peter Mancroft, opposite the Forum, that some visitors mistake them for the Anglican Cathedral. Then, there are churches that have been converted to other uses and some, sadly, that no one can work out an everyday use for. All, though, were the work of generations of families who laboured on them for the glory of God. They are quite exquisite and have many stories to tell.

There has been a settlement at Norwich since the 5th-7th centuries. Named Northwic it slowly grew to become one of the most important towns in Anglo Saxon England, thanks to its rich agricultural land and close proximity to the River Wensum and River Yare – perfect of course for trade.

Following the Norman Conquest, Herbert de Losinga was required by the Pope, as an act of penance for the serious moral crime of ‘buying’ the Bishopric of Theford – he paid nineteen hundred pounds, a colossal sum – to build a Cathedral adjacent to Tombland. He also built a Benedictine Monastery here. The first stone was laid by him in 1094. Tombland, which has nothing to do with ‘tombs’ but derives from the Norse word ‘thum’ meaning ‘empty space’, became the new centre of the city with a thriving market.  The soaring proportions of the Cathedral Church of the Holy and Undivided Trinity, with its thousand roof bosses and compelling pristine spirit, has remained the chief glory of this city, even though the ‘busyness’ of life is best manifested nowadays in other parts. Her Majesty Queen Elizabeth II is, at the very moment of writing, opening the new Hostry, the largest building project in Norwich Cathedral’s history since its inception. It has been 11 years in the making, and is designed by Sir Michael Hopkins. 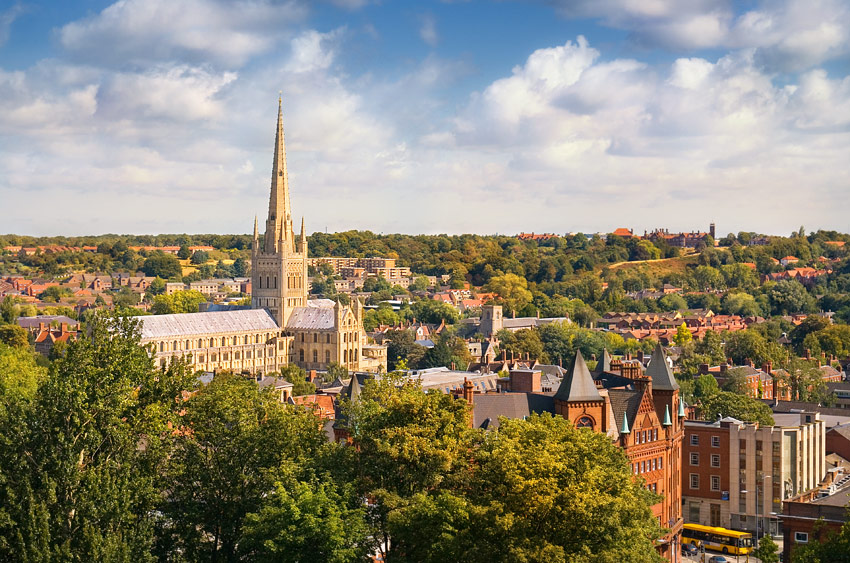 The nearby Castle was also built at this time.  The Normans wanted to impose their authority on those who may be tempted to oppose them. It is a fine structure, of Caen stone, resurfaced in Victorian times. Kett was hung in chains over the walls of Norwich Castle following his rebellion in 1549. Yet, it never had a monarch live here. It has a fascinating museum inside, which includes a 19th century bird collection, a wonderful array of paintings by the ‘Norwich School’ – notably John Crome and John Sell Cotman – and a world-beating display of ceramic teapots. 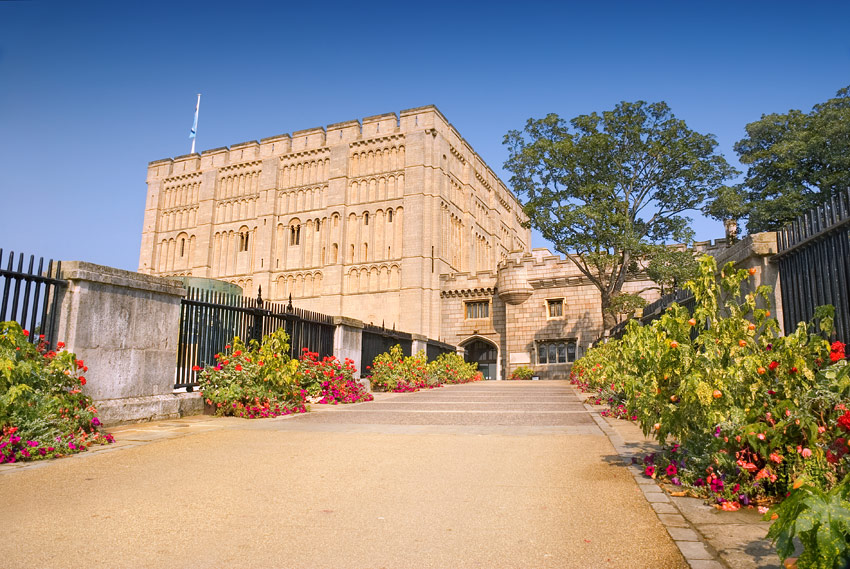 King Street, just down from the Castle was, during this period, the most important street in the city. Slightly later, Elm Hill – at the other end of Tombland – became fashionable. It was the home of many prosperous merchants and civic personalities, including the Paston family who bequeathed us the Paston Letters, which is still in print. Thereafter, Elm Hill fell into decay and was only saved from destruction in the early 20th Century by a single vote of the Council.

Today, for most people going about their everyday business, the centre of town is the Market Place. This has been the ‘social’ hub of Norwich since, probably, the 18th Century. At the bottom of the square is the wonderfully named Gentleman’s Walk. The male of the species was, in olden days, the ‘Peacock’. Dressed in silk waistcoats, with wigs suitably powdered, gentlemen would try to attract the ladies and also celebrate the fact that they were masters of the universe by parading up and down Gentleman’s Walk, dropping into the many coffee houses for a chat with their peers. It is interesting that the term ‘Tuck Shop’ – evidenced in public schools all over the Empire – may have originated from ‘Tuck’s Coffee House’ which was an attraction here. It had a library of sorts and the latest papers, along with sweets and delicacies to be enjoyed.

The Market Place has recently been revamped and all stalls replaced in line with current trading laws. The vibrant coloured tops of the units have been retained. It is always changing as it is a crucible of modern retail ideas: thus we have a unit trading in Polish food, another in fine coffees, one specialising in Norfolk cheese and ice cream, and look – here’s one that sells strawberry and avocado soap!  It is great place to propose a new business without the crippling overheads of a shop in an established street – and Norwich people are very enterprising. Thus, if you want to see the next ‘big thing’, you can do worse than wander about this market. 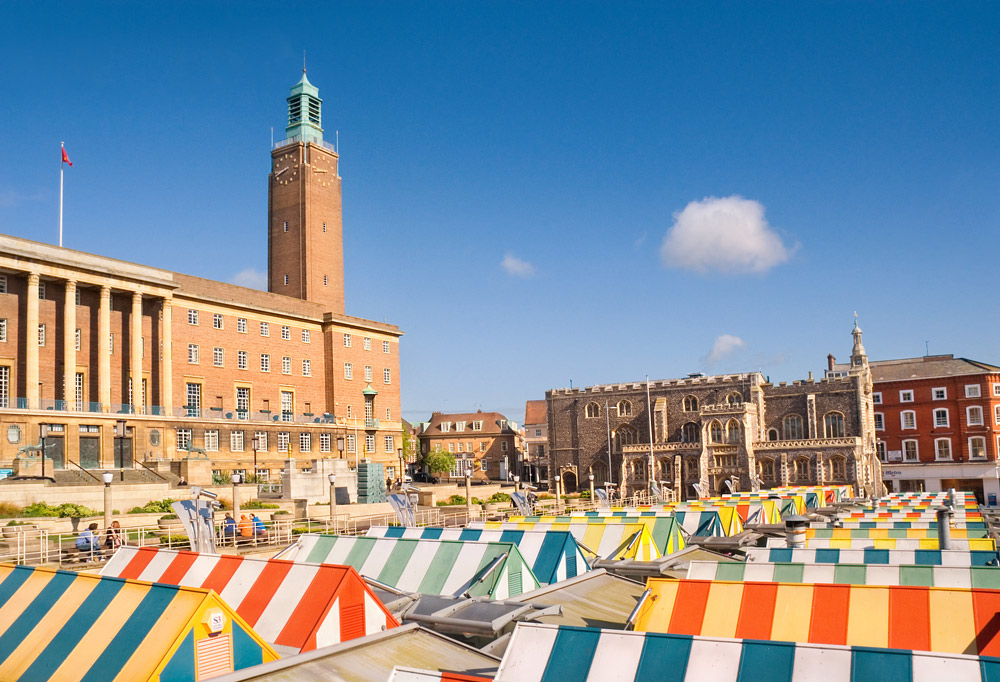 The Millennium Library at the top of the Market Place is a very fine structure, horse-shoe shaped, designed by Sir Michael Hopkins and built of hand-made bricks. As well as books, you can have a pizza or beer here, take out CDs and films or research your family history. It is very friendly with helpful staff – the building as a whole is called ‘The Forum’, which means ‘meeting place’ in Latin, which is just how many citizens use it. Proud to relate, it is the most successful library complex in the country which is as it should be, Norwich having pioneered a ‘book-lending’ service more than four hundred years ago.

The area in front of the Forum has lately been redesigned as a modern version of a small Greek amphitheatre. There are bands here; and all sorts of exhibitions.  All over the steps will be citizens eating and drinking, mostly food from the market.

Just below the Forum, in Haymarket, is a statue of Sir Thomas Browne , one of the most influential gentlemen in Norwich’s history. He wrote Religio Medici, a work of international renown concerning the raison d’etre of the medical profession. He was knighted by Charles II in 1671.

Gentleman’s Walk is packed with high street names and the thousands of daily shoppers that use them. The name Gentleman’s Walk originates from the gentleman of the 18th Century who used the area for their daily adventures, which more than often involved drinking in the many inns that existed. Street entertainment and buskers are often found in Gentleman’s Walk, which is also home to the colourful and friendly Norwich Market – the largest open air market in England!

St Stephen’s Street is home to many high street stores and provides access to Chapelfield shopping complex. Chapelfield Norwich was opened in 2005. A survey by a major credit card company in 2006 put Norwich city centre as number 1 in the UK as regards customer satisfaction. Chapelfield Centre is on the site previously occupied by Caleys chocolate, at one time a famous Norwich company.

The Norwich Lanes. From City Hall Clock Tower cross the road, pass the Guildhall and you’ll find yourself at the top of Lower Goat Lane. Head down here and you’ll enter the Norwich Lanes – home to numerous cobbled lanes and streets, quaint independent shops full of charming character. It’s a wonderful place to visit and an ideal escape from the busy high streets. 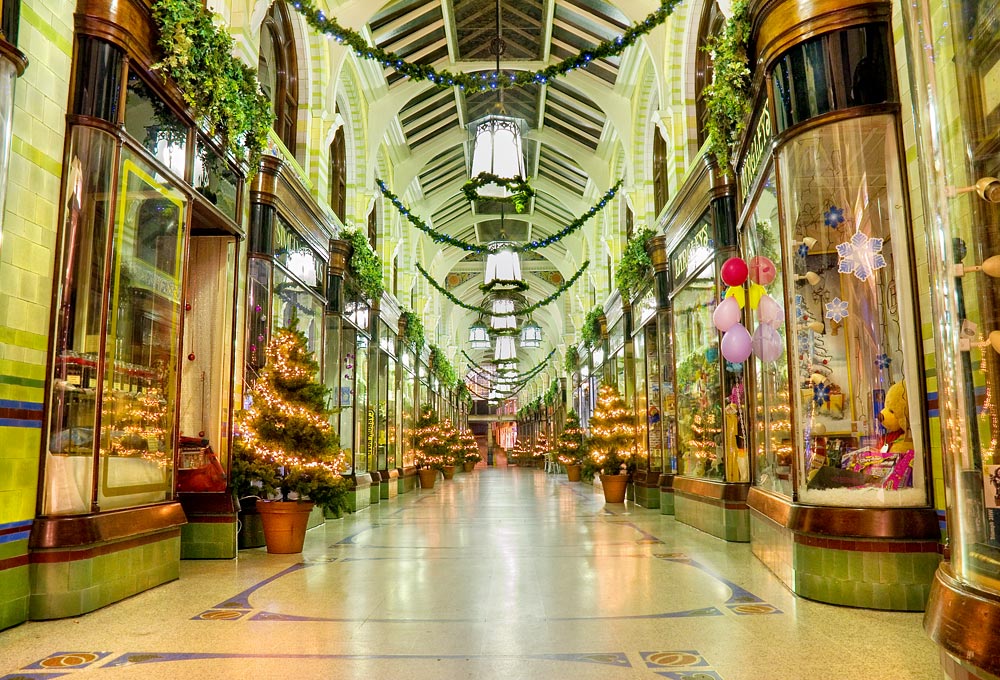 The Royal Arcade in Norwich at Christmas

Between Gentleman’s Walk and Castle Street you will find the Royal Arcade designed by George Skipper in 1899. Arcades like this were the forerunners of today’s big shopping malls. It was restored in 2001, and contains some of the finest art nouveau stained glass, sculpture and tiles in the country.

Where to stay in Norwich

Norwich is a wonderful place to visit any time of the year with plenty of accommodation options to choose from. If you are happy to stay in a Hotel, you have some great choices: 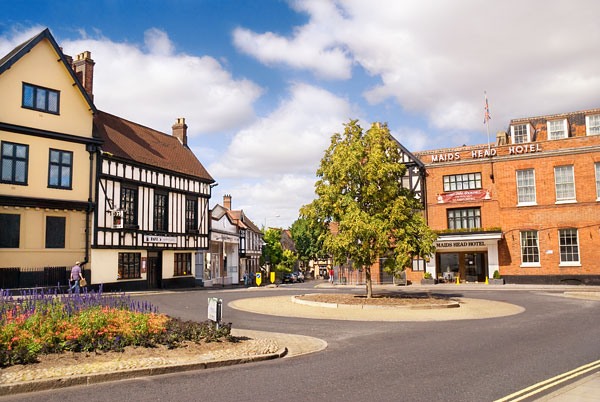 The Maids Head Hotel in Norwich

There are a multitude of designated parking spaces in Norwich city centre, mainly hosted by various large multi story carparks throughout the city. For locations and availability try our Norwich Parking Spaces Live availability system – updated every 5 minutes, it tells you exactly where to find available parking spaces in Norwich! For those who don’t fancy a drive into Norwich city centre, try the Norwich Park and Ride availability system.

If you are in need of some peace and quiet, try a stroll along the River Wensum. This beautiful walk in Norwich is perfect for the summertime and provides some lovely postcard scenes. 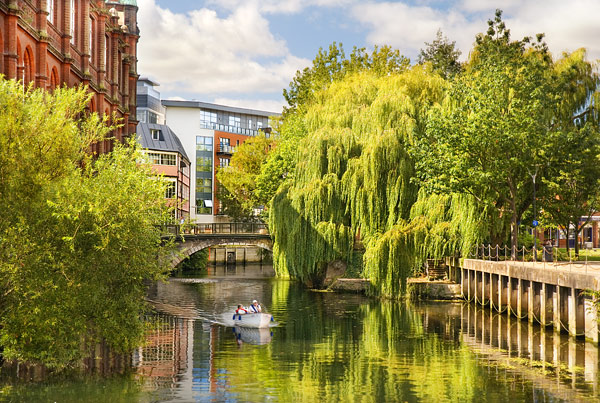 Places to visit in Norwich

Some essential highlights, which we can unfortunately only just mention here due to lack of space but which are discussed more fully in the above books, include: